Rathedaung — Two landmines exploded simultaneously nearby a Rohingya village in Rathedaung Township on Tuesday (Feb 11) and no casualties occurred in the incident, reports say. At around 12:40pm of the day, a column of Myanmar military and BGP (Border Guard Police) numbering about hundred was reported to have been marching by 'Sin Kone Taing Rohingya' village towards 'Sin Kone Taing Rakhine' village in northern Rathedaung. As they reached by the Lakeside (to the east of 'Sin Kone Taing Rohingya' village), two seemingly homemade anti-personnel landmines blasted simultaneously or one immediately after another.

However, no casualties to either the column of Military and BGP or the Rohingya villagers have been reported in the blasts.

"Immediately after the landmine explosions, the Myanmar troops took their position pointing their guns towards 'Sin Kone Taing Rohingya' village. Since their commander didn't give any order, they didn't begin firing. Meanwhile, a group of Rakhines from ward the mountain-side nearby 'Sin Kone Taing Rakhine' village were carefully monitoring what the military and BGP were doing" said a Rohingya villager in northern Rathedaung.

After that, the Military along with the BGP proceeded towards 'Aung Sar Chaung' at the bordering region between Buthidaung and Rathedaung Townships, instead of 'Sin Kone Taing Rakhine' village.

The Myanmar military and the Rakhine rebels of Arakan Army or AA have been fighting in northern Arakan since late 2018, affecting not only Rakhine villagers but also remaining Rohingya Genocide survivors in the region. 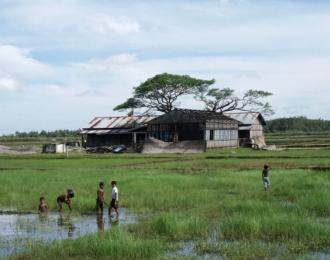