With Aung San Suu Kyi due to appear at the UN’s highest court tomorrow to face questions over Myanmar’s persecution of its Rohingya Muslims, Tasnim Nazeer explores why the international community must stand up against its intimidation of those fighting for justice.

Two leading Buddhist activists of the Rohingya campaign in Europe are fearing for their lives after calls for their abduction were circulated in a video message by Aye Ne Win, the grandson of the former dictator of Myanmar.

Dr Maung Zarni, who is based in London, and Nay San Lwin, based in Germany, have both worked tirelessly to call for accountability and justice for the Rohingya Muslims being persecuted in Myanmar. Both activists have played a prominent role in supporting Gambia to bring scrutiny to the country’s actions, much to the dislike of Myanmar’s authorities.

Myanmar would never have thought that a small country in West Africa could pave the way for justice and bring other more powerful countries to shame. Yet, Gambia with the support of activists, is doing just that by filing a lawsuit with the UN’s highest court, the International Court of Justice (ICJ), formally accusing Myanmar of genocide.

More than 750,000 Rohingya refugees, mostly women and children, have fled Myanmar in a bid to escape persecution. They have faced torture, gang rapes, violence, killings and have escaped across the border to Bangladesh after Myanmar’s forces launched a brutal crackdown on the minority Muslim community in August 2017. To date, 1.2 million persecuted Rohingya were forced to seek sanctuary in Bangladesh.

Now Myanmar is trying to find ways to silence and permanently shut down leading activists who want to ensure that those who have been harmed have a right to justice. They are using tactics such as intimidation and fear-mongering to halt efforts, yet both Dr Maung Zarni and Nay San Lwin remain undeterred by the threats and will be attending the ICJ – where Myanmar’s leader Aung San Suu Kyi is due to appear – this week.

In the video circulated, Aye Ne Win says: “Concerning Maung Zarni and Nay San Lwin, it is high time for Myanmar military intelligence services to launch an Israeli-style kidnap operation that captured Eichmann in South America. These creatures should not dare to come to our country. They scream foul from abroad but they need to be tried here [in Myanmar].”

Myanmar has a history of shutting down critics and has previously unjustifiably jailed a filmmaker for Facebook posts criticising its military. It also sent two Reuters journalists to jail for seven years, in a bid to conceal the extent of persecution of Rohingya Muslims. The international community must now condemn Ne Win and ensure that those who are being threatened have a right to be protected by the law.

“Threats against any activist anywhere are damaging to any effort to establish truth and seek justice for victims of human rights violations, as well as to attempts to resolve underlying causes of violence,” Katherine Southwick, an international legal scholar and advisor to the Free Rohingya Coalition, said. “The specific threats against Dr Maung Zarni and Mr Nay San Lwin are dangerous not just to the personal security of these men and their families. These threats also create a climate of fear and intimidation against any individual or non-governmental group that might call for, support, or cooperate with justice efforts like the ICJ case.”

It is worth noting that Aye Ne Win is the oldest grandson of the late Burmese dictator General Ne Win, who initiated the institutionalised destruction of the Rohingya with the first state-organised wave of violent deportation of 250,000 of the minority as early as February 1978.

“These public threats to me and Rohingya campaigner Nay San Lwin coming from Aye Ne Win must be taken in the alarming context where dodgy regimes blatantly murder their dissidents and democrats on foreign soil,” Dr Zarni said. “In the last seven years since I blew the whistle on Myanmar genocide, the Myanmar Government – embassies in Brunei, Kuala Lumpur and London – have been engaged in threatening behaviours against me.”

It is clear that Aung San Suu Kyi feels threatened by the prospect of being held accountable for charges of genocide and will look to utilise methods of intimidation to her advantage.

No activist should ever be threatened with abduction for raising awareness of human rights violations. I have heard the testimonies of Rohingya women who have experienced harrowing rape, violence, murder of their loved ones and abuse at the hands of the Myanmar military. They deserve justice and accountability and the right to have some form of closure for what they have been through. Those who are supporting their rights to justice must be protected at all costs.

Will the international community stand up against Myanmar’s oppression or continue to remain silent? 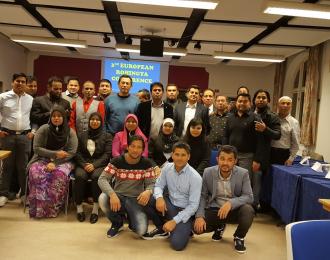