Tun Khin, the President of the Burmese Rohingya Organisation UK, will testify in an Argentinian court this Thursday, marking the start of a historic legal case on the Rohingya genocide.

In November, the Argentinian judiciary decided to open a court case against the Myanmar military over the Rohingya genocide under the legal principle of universal jurisdiction, which holds that some crimes are so horrific that they can be tried anywhere. Tun Khin’s testimony, at 3pm local time before the Federal Court in Buenos Aires, marks the start of the judicial investigation related to the case.

“This is a landmark moment for the Rohingya people all over the world. To see the start of a formal investigation into the genocide in an Argentinian court not only validates our struggle for justice, but also gives us hope that justice is possible,” said Tun Khin.

“The fact that I will be testifying just a few weeks after the case was accepted also shows that this case is moving forward quickly and with purpose. We applaud the moral leadership and courage of the Argentinian judiciary to help ensure accountability for the Tatmadaw’s horrific crimes.”

Tun Khin’s testimony will focus on his personal history, which in many ways reflects the tragic modern history of the Rohingya people. In 1978, Tun Khin’s parents were among some 200,000 people forced to into Bangladesh after the Myanmar military’s brutal Operation Dragon King campaign against Rohingya in Rakhine State.

Tun Khin himself felt compelled to flee Rakhine State in the 1990s when he was unable to attend university simply because he was a Rohingya, reflecting long-standing oppressive and discriminatory policies against the Rohingya in Myanmar.

The testimony will also cover recent crimes by the Tatmadaw, including the vicious violence in 2017 when soldiers and their proxies killed thousands of Rohingya, forced some 800,000 to flee into Bangladesh and engaged in widespread sexual violence. In August, in a separate court hearing related to BROUK’s case in Argentina, six Rohingya women who had been victims of such violence testified remotely from refugee camps in Bangladesh.

“This is the start of a court case that we ultimately hope will end with the architects of the Rohingya genocide behind bars. We will focus on identifying perpetrators of these crimes, right up to Myanmar’s senior military leadership. We will also seek witness protection measure so that Rohingya brave enough to testify can do so without fear of reprisals against themselves or their families,” said Tun Khin.

On the 26 November 2021 the Second Chamber of the Federal Criminal Court in Buenos Aires confirmed that it would launch a case against senior Myanmar officials accused of genocide and crimes against humanity against the Rohingya. BROUK first petitioned the Argentinian judiciary to open such a case in November 2019.

For more background on the case, see:

“Inching Closer to a Historic Universal Jurisdiction Case in Argentina on the Rohingya Genocide”, article, 30 September 2021. 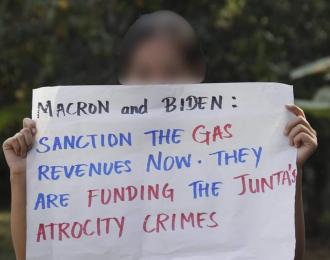